skip to main | skip to sidebar

I was really looking forward to this race because not only was it my first half marathon, but it was also going to be girl time, centered around running. My kind of fun! It was going to be the Divas organization's first race in the DC area, as well, so it sounded awesome.

After about a four hour drive, we arrived at our hotel, met up with a friend and drove together to the Divas race expo that was held at nearby Lansdowne Resort to pick up our packets. The resort didn't have enough parking for all the Divas, though, so we had to park on the street. The expo itself was around the size I expected, but the race had a lot fewer sponsors than most races that size do, so it didn't have a lot of shopping or selection available unless you really liked headbands. What they had was decent enough, though. The "stores" there didn't have much selection, though, and we had gotten there in the afternoon. I wonder what was available for those who came in the evening! 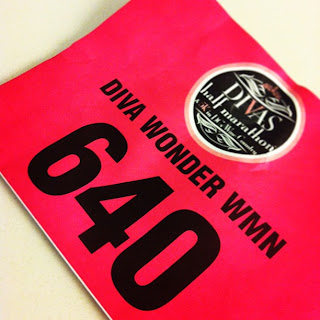 Picking up the bags that contained our shirts and bibs was pretty easy and straight-forward, but I was really surprised at how few freebies came in the bag. I've been in many other races half that size (and half that price--we payed $97, including the price and all fees) that have at least some samples--a bottle of water, an energy bar and a lip balm. Something! What did we get? Our bib, the race shirt and...safety pins? For just under $100? Boo. Thumbs down.

After we explored what there was of the expo, we went to dinner and hung out at the hotel. We had a great time together and we laughed a lot!

The next morning, we woke up before 5am to the sound of elephants stomping overhead (probably fellow Diva racers getting up and ready), so we got up. Once we were dressed, we realized that the hotel fridge was broken, so all of our expensive food that we were going to eat before the race had spoiled. Thankfully, Chick-fil-a was open, so we grabbed something quick and headed to the winery. The Divas coordinators had said that getting to the winery early would be a good thing because of traffic, so we left more than an hour to get the 8 miles to the winery. However, we sat in traffic FOREVER and we barely made it there for what would have been the 7:30 start. And there was still a massive line of traffic from both directions waiting to get into the winery. The winery is surrounded by tiny two-lane roads, so it would have been impossible to get all the 3,500 runners and the spectators into the parking area in enough time. Poor planning on the organizers' parts, but they've vowed to rectify that problem next year.

After parking in the field, we made our way quickly toward the entrance. There were four port-a-johns there, but there was also a long line of ladies waiting to use them. There were ladies running into the woods near the parking field because the race was supposed to start about 10 minutes after we arrived. However, someone told us there were more johns down by the starting line, so we headed there. When we got down the hill to the starting line area, there were a lot more bathrooms available, but there were also a lot more ladies waiting to use them. The number of bathrooms wasn't enough to handle the flow (no pun intended) of runners who were arriving late (because of the ridiculous traffic) and needed to use them.

After we finally used the bathrooms and quickly got to our time corrals for the start of the race, there was an announcement saying that the start would be delayed about 20 minutes to allow for more runners to arrive. However, the announcer implied that it was the runners' faults for not heeding the warnings by the coordinators to arrive early...pardon us for thinking an hour was enough time to get 8 miles! The roads around the winery were part of the race course, so they couldn't start until all the cars were gone. Meanwhile, the bathroom lines were backing up again because the start time was pushed back once again. Ladies were getting out of the lines, going behind the potties to squat behind trees or running up the hill into the woods again. 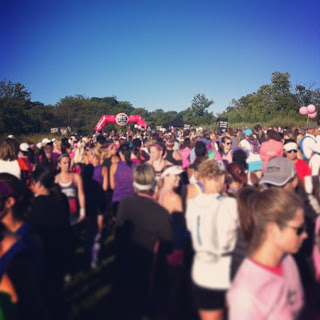 The start time kept getting pushed back until it was announced that the race would begin AN HOUR AND A HALF AFTER IT WAS SCHEDULED TO START! Great. Whatever. At least more runners had the opportunity to arrive. The race started and we finally got going.

Most of the course was made up of country roads that wound around big fields and it was a beautiful view of the local countryside. Plus, the weather was gorgeous, cool and dry, so it made the whole thing even prettier. 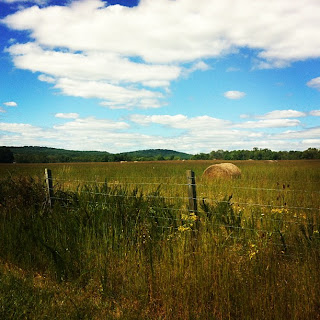 The organizers also directed the race through a few neighborhoods, which was nice, but I kind of felt badly for the people living along the route because they'd have to wait an extra hour and a half to get out of their driveways than they had already planned to. But people in the neighborhoods were out cheering for us...and some letting people use their bathrooms, apparently.

I will say that there were a fair number of EMTs in golf carts (and a couple of ambulances) patrolling the route, so it seemed that the ladies who needed medical attention actually got it. Two things that were definitely lacking on the route were extra bathrooms and food/fuel options. I, for one, had to pee in the bushes in someone's front yard around mile 7 because there weren't bathrooms close enough and I was in pain. Because the race was delayed so long, a lot of runners had to "go" again once the race started and they were already hungry again because the food they'd fueled up with had already digested. I, personally, was starving by around mile 6-7...I mean, my stomach was literally growling.

Now I've heard a number of runners who felt underprepared because there were a lot more big hills in the course than were advertised. I believe they advertised it as "some rolling hills with a big hill near the end" but it was a lot more than that. I, personally, didn't feel upset about it because I didn't even pay attention to the map on the website. (Actually I very rarely do that for any race anymore. I made the mistake of worrying about the hill in one particular race that everyone was ended up not being bad at all...after that, I decided not to look anymore and just take each hill in each race as it comes.) But I DO understand why people were upset! If I would have expected one type of race course and gotten another, I'd be pretty ticked, too, especially if I were trying to use my time for this race to qualify for another race. Again, the Divas organization has vowed to rectify this issue, as well, by changing the course.

By the time I reached the end of the race, there were already runners leaving, but because there weren't many routes out of the finish area they had to walk ON the course. So runners were having to run around the people who were walking out. Not great. The finish line area was a little confusing, too, and they didn't end up giving out the champagne they had promised when people first signed up. (They did mention that before the race, but I still didn't like that. Don't advertise something if you're not going to deliver.) Also, I think the tiaras/boas could have been passed out AFTER runners crossed the finish line. That caused a little clogging in the course near the end. But I know lots of ladies were happy with the muscle men at the finish line who handed out the medals.

Overall, aside from a few major annoyances, the race was decent. The weather was beautiful and I was running with a bunch of other chicks, so I was happy. I was also running injured, though, so I wasn't in it to break any land speed records or get any PRs and I'm okay with my time. Will I be running a Divas race again? Probably not. I don't like the fact that you have to pay so much for so little. If I'm going to travel again for a race, I'm going to make sure I get my money's worth. 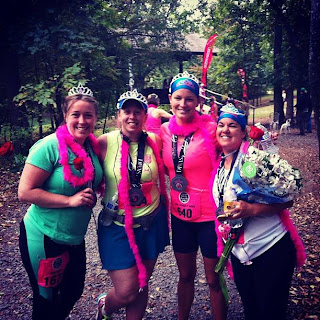